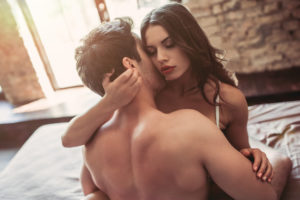 One of my characters once asked: How do men make love without falling in love?

This was the quandary Kat found herself in when she allowed herself to fall for Cole in my romance novel, “A Much Younger Man.”

Readers, I’d love your insight into this question. Do you think it’s biological? Is the very act of allowing someone within your body akin to bringing them into your heart?

If we want to get technical, I cite a fascinating article from Boston University School of Medicine. In this research, female sexuality is said to go through four phases. These are known as the sexual response cycle and consists of: desire, arousal, orgasm, and resolution. It’s interesting to note that the resolution phase is both physiologic and psychologic.

Then, I decided to go a little less high-brow in my research and consult with Self Magazine. The 2016 article by Zahra Barnes confirmed that sex doesn’t just affect our bodies, but also our brains.

Our Body and Brain on Sex

The article highlights 19 steps that occur in our bodies…yep, you read that right, 19! Women are incredibly complex and magical creatures. Unlike men, our sexuality isn’t just a matter of: 1. I feel attraction; 2. let’s do it; and 3. thank you very much. Nope. We have 19 body responses, but the one that most interested me involved the release of the oxytocin during love making.

This fact gave credence to my theory that a tiny bit of falling in love occurs every time women make love due in large part to an increase in the production of oxytocin.

Interestingly, oxytocin can have a two-faced effect. For women, it’s often known as the “feel-good hormone” and can make them feel in love. In men, the hormone may serve to strengthen bad memories and can increase fear and anxiety. When I learned about this last tidbit, the “fight or flight” response came to my mind.

Ladies, if you’ve ever witnessed a man scamper faster than a jack rabbit to dress and retrieve clothing while you innocently made a quick trip to the bathroom after the deed, you know what I’m talking about.

Sex is an Emotion in Motion

Where does this lead us? I’m afraid it means we must guard our hearts. It’s fine to act on desire. It’s certainly what makes romance novels so much fun to read. But, as Mae West once said, “Sex is an emotion in motion.” FYI…for those who aren’t familiar with Mae West, she died in 1980 at the age of 87 after a long acting career in which she became known as a sex symbol.

So, be aware of the emotions that occur once you put something into motion. And, if your man ever fails you, grab a good book!